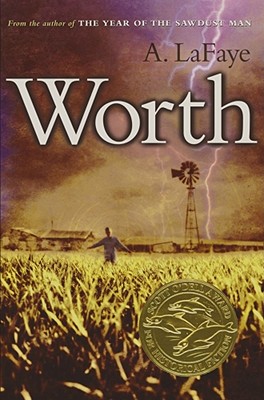 After Nathaniel's leg is crushed in an accident, his father brings home an orphan boy, John Worth, to help work the fields. Worth has come to Nebraska from New York City on the Orphan Train, which brings homeless children west to find new lives.
Nathaniel feels increasingly jealous of the boy who has taken over not only his work but the attention of his father, who has barely spoken to him since his injury. In school for the first time he is far behind even his youngest classmates, and he feels as useless there as he does at home.
Meanwhile, Worth is still grieving for his family and his old life. As the farm chores prevent him from going to school, he also resents losing his dream of an education and a good job. And for all the work he does, he knows he will never inherit the farm that he's helping to save.
But a battle between ranchers and farmers -- and a book of Greek mythology that Nathaniel reads aloud each evening -- forges a connection between the two boys, who begin to discover that maybe there is enough room on the farm, and in the family, for both of them.
A. LaFaye's dynamic portrayal of two boys longing for something they no longer have -- and finding the resources to face the future -- offers a fresh perspective on the thousands of children who moved west via the Orphan Trains in the late nineteenth century.

A. LaFaye (the "A" is for Alexandria) is the author of Worth, for which she received the Scott O'Dell Award, as well as The Year of the Sawdust Man, Nissa's Place, The Strength of Saints, Edith Shay, Strawberry Hill, and Dad, in Spirit. She teaches at California State University at San Bernardino during the school year and at Hollins University in Roanoke, Virginia, in the summer. She lives in Cabot, Arkansas.
Loading...
or
Not Currently Available for Direct Purchase