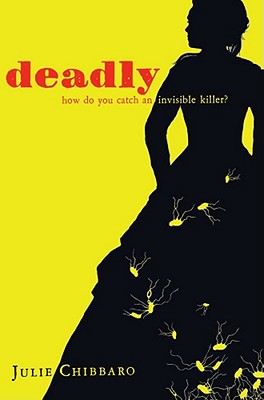 A mysterious outbreak of typhoid fever is sweeping New York.
Could the city’s future rest with its most unlikely scientist?

If Prudence Galewski is ever going to get out of Mrs. Browning’s esteemed School for Girls, she must demonstrate her refinement and charm by securing a job appropriate for a young lady. But Prudence isn’t like the other girls. She is fascinated by how the human body works and why it fails.

With a stroke of luck, she lands a position in a laboratory, where she is swept into an investigation of the fever bound to change medical history. Prudence quickly learns that an inquiry of this proportion is not confined to the lab. From ritzy mansions to shady bars and rundown tenements, she explores every potential cause of the disease. But there’s no answer in sight—until the volatile Mary Mallon emerges. Dubbed “Typhoid Mary” by the press, Mary is an Irish immigrant who has worked as a cook in every home the fever has ravaged. Strangely, though, she hasn’t been sick a day in her life. Is the accusation against her an act of discrimination? Or is she the first clue in a new scientific discovery?

Prudence is determined to find out. In a time when science is for men, she’ll have to prove to the city, and to herself, that she can help solve one of the greatest medical mysteries of the twentieth century.

Julie Chibbaro grew up in New York City wondering how so many people could live together without infecting each other with mortal diseases.  After attending Performing Arts High School for theater, she ran away to Mexico, where she survived an earthquake and a motorcycle crash and learned a little something about death.  Returning to New York, she decided to create her own fictional characters instead of playing one.  Julie Chibbaro is the author of Redemption, which won the 2005 American Book Award.  Julie teaches fiction and creative writing in New York.  You can also visit her at juliechibbaro.com.