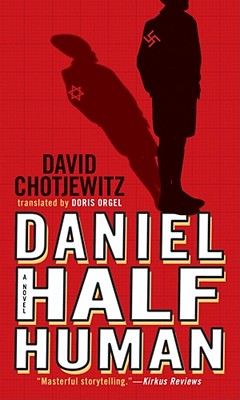 At the dawn of Hitler's rise to power in Germany in 1933 and a period of the most brutal, aggressive anti-Semitism the world has ever seen, two boys swear eternal brotherhood by slitting their wrists and mingling their blood. Having experienced so much together, even a night in jail after painting a swastika on a wall in the hated Communist section of Hamburg, Daniel and Armin had become the best of friends.

But then, with the scar on his wrist still healing, Daniel receives some life-altering news: He is half-Jewish, and as such, half-hated by a growing number of neighbors, teachers, and friends. Quickly, he decides to keep his identity a secret, conspiring with Armin to join the Hitler Youth -- but only one of them can, and will, join, with terrible consequences.

David Chotjewitz is a teacher and playwright. He lives with his daughter in Hamburg, Germany, where, in 2000, this book was published to acclaim.

Doris Orgel's own novel of the Nazi period, The Devil in Vienne, is considered a classic. She has translated many books from German, including a recent volume of the Grimm fairy tales. She lives in New York City.

Praise For Daniel Half Human…