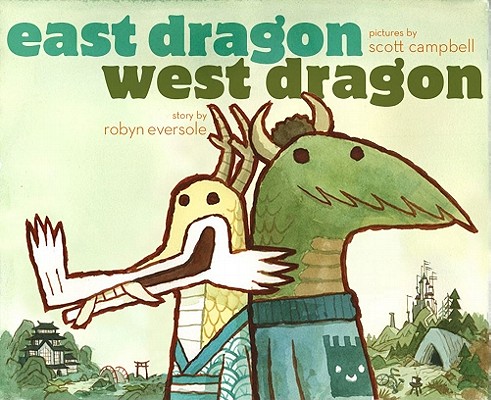 Detail-rich illustrations combine with a lighthearted, inspiring message to create a playful twist on the classic theme of fierce, fearless dragons. This story of friendship across cultures begs to be read again and again!

Dr. Robyn Eversole is originally from Clarksburg, West Virginia, and now lives in Tasmania with her husband, Wayne; their daughter, Rebekkah; and various household members with fur, feathers, and fins. As an anthropologist, she has worked in South America and in universities across Australia. She has published six books for children.

Scott Campbell’s paintings have appeared in numerous shows and publications around the world. He has created award-winning comics, such as “Igloo Head and Tree Head,” which appeared in the Flight anthology, and is the illustrator of Zombie in Love and Zombie in Love 2 + 1 by Kelly DiPucchio; East Dragon, West Dragon by Robyn Eversole; and If Dogs Run Free by Bob Dylan. He is the author and illustrator of Hug Machine. Scott lives in New York City. Visit him at PyramidCar.com.

*“Eversole’s spare narrative mixes tongue-in-cheek exaggeration, childhood fears and adventure, inspiring Campbell to contrast the rough and the refined, designing detailed watercolor worlds brimming with humor and beauty. This primer on friendship wrapped in hijinks is paced for maximum pleasure.”

"Watercolor visions of both dragon realms combine traditional folk art and contemporary originality with cross-sectioned full-page images. Far-eastern architecture contrasts with European medieval castles, while modern technology, toys, and conveniences add a twist of the unexpected. Readers can search the pages for humorous scenes of modern comforts–a celebration with rock bands, karaoke, soccer for “tin” men and pizza for all. With an underlying message of the ills of prejudgment, this title should find a place in all libraries."