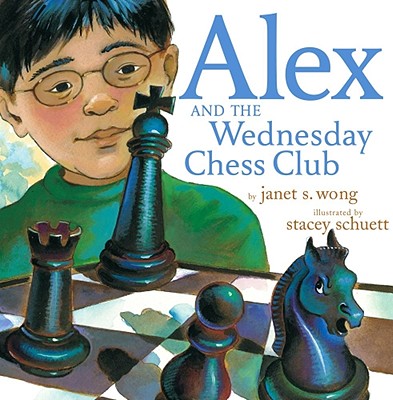 Alex and the Wednesday Chess Club

Alex first learned to play chess when he was four years old. He loved it. He loved the pieces, the challenge, and the sweet taste that winning left in his mouth. He loved it until he played a chess game with moldy old Uncle Hooya...and lost. Then Alex decided to give up chess for good.
Now in third grade Alex wants to give chess another try. He joins the chess club and discovers that chess is fun again. He plays his friends, he listens to the coach, and he practices at school, at home, and on the computer. Alex is a chess maniac! All of this practice is leading up to the big tournament, where Alex finds himself face-to-face with Little Cousin Hooya. Memories of his earlier defeat return, but now is his chance to finally beat a Hooya. Is Alex up to the challenge?
Janet Wong's lyrical text, complemented by Stacey Schuett's bright illustrations, will inspire chess players of all ages to practice, practice, practice -- and to avoid moldy old Uncle Hooya!

Praise For Alex and the Wednesday Chess Club…

Michelle Anderson Executive Director, America's Foundation for Chess Wong takes a game perceived as something only the brainy kids would want to play and brings it to life -- so much so that kids and adults alike will read her book and be left wanting more. More chess, more time to think through a problem, more problems to solve, and definitely more Wong. Put a copy in every classroom!

Janet S. Wong is the author of more than a dozen picture books and poetry collections. Her work includes Night Garden: Poems from the World of Dreams, a New York Times Best Illustrated Book, and Knock on Wood: Poems About Superstitions, both illustrated by Julie Paschkis, as well as Grump, a Charlotte Zolotow Award Highly Commended Book, illustrated by John Wallace. Janet lives with her family in Medina, Washington.