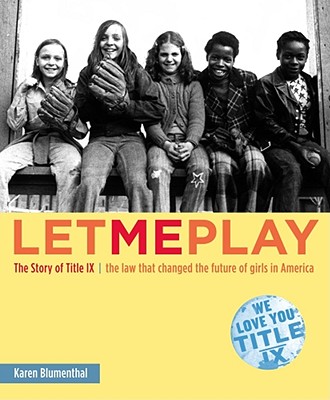 The Story of Title IX: The Law That Changed the Future of Girls in America

Can girls play softball? Can girls be school crossing guards? Can girls play basketball or ice hockey or soccer? Can girls become lawyers or doctors or engineers?
Of course they can...
today. But just a few decades ago, opportunities for girls were far more limited, not because they weren't capable of playing or didn't want to become doctors or lawyers, but because they weren't allowed to. Then quietly, in 1972, something momentous happened: Congress passed a law called "Title IX," forever changing the lives of American girls.
Hundreds of determined lawmakers, teachers, parents, and athletes carefully plotted to ensure that the law was passed, protected, and enforced. Time and time again, they were pushed back by Þerce opposition. But as a result of their perseverance, millions of American girls can now play sports. Young women make up half of the nation's medical and law students, and star on the best basketball, soccer, and softball teams in the world. This small law made a huge difference.
From the Sibert Honor-winning author of Six Days in October comes this powerful tale of courage and persistence, the stories of the people who believed that girls could do anything -- and were willing to fight to prove it.
A Junior Library Guild Selection

Karen Blumenthal (1959–2020) was a financial journalist and editor whose career included five years with The Dallas Morning News and twenty-five with The Wall Street Journal before becoming an award-winning children’s nonfiction book writer. Three of her books were finalists for the YALSA Excellence in Nonfiction for Young Adults Award, and she was the author of Sibert Honor Book Six Days in October: The Stock Market Crash of 1929.
Loading...
or
Not Currently Available for Direct Purchase