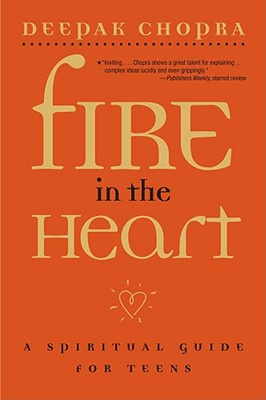 Fire in the Heart (Paperback)

A Spiritual Guide for Teens

A fifteen-year-old boy is walking through a swirling fog on his way to school when a voice calls out, "Come here. We need to talk." Out of the mist emerges an old man with a white beard. He is a fantastic figure, as wizardly as Merlin, as wise as Socrates, as peaceful as Buddha. Whoever he is, the old man has appeared on that very day to change the boy's life.

"You are old enough to learn about things," he says mysteriously. "And who is going to teach you but me?"

The old man gives the boy four days of "soul training," a time of riddles, tricks, parables, and incredible twists that brings out surprising answers to each of four burning questions about spirituality:

Do I have a soul?
How do wishes come true?
What is the supreme force in the universe?
How can I change the world?

"The old man with the white beard showed me the spiritual side of life," writes Deepak Chopra, "where real passion and excitement come from. So before you begin, take a deep breath. This story could turn out to be yours."

Deepak Chopra, MD, has gained worldwide acclaim as a teacher and writer in fields as diverse as mind-body medicine, Ayurveda, the nature of God, and the path to success. Time magazine called him one of the 100 icons of the twentieth century, “the poet-prophet of alternative medicine.” The author of more than sixty-four books translated into over eighty-five languages, including nineteen New York Times bestsellers, Dr. Chopra has sold more than twenty million copies of his books worldwide. He is the founder of the Chopra Center in Carlsbad, California.

Praise For Fire in the Heart: A Spiritual Guide for Teens…