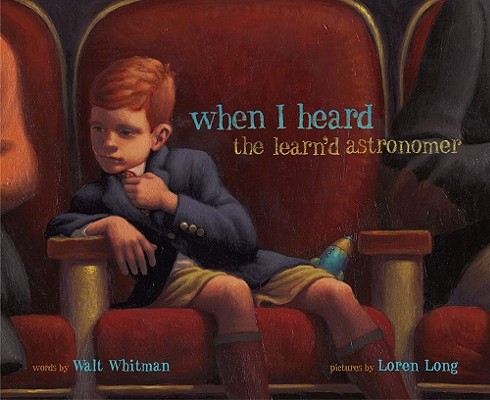 When I Heard the Learn'd Astronomer

Leave time for wonder.
Walt Whitman's "When I Heard the Learn'd Astronomer" is an enduring celebration of the imagination. Here, Whitman's wise words are beautifully recast by New York Times #1 best-selling illustrator Loren Long to tell the story of a boy's fascination with the heavens. Toy rocket in hand, the boy finds himself in a crowded, stuffy lecture hall. At first he is amazed by the charts and the figures. But when he finds himself overwhelmed by the pontifications of an academic, he retreats to the great outdoors and does something as universal as the stars themselves...
he dreams.

Walt Whitman (1819-1892), arguably one of America's most influential and innovative poets, was born into a working-class family in West Hills, New York, and grew up in Brooklyn. His Leaves of Grass, from which "When I Heard the Learn'd Astronomer" comes, is considered one of the central volumes in the history of world poetry. While most other major writers of his time enjoyed a highly structured, classical education at private institutions, Whitman forged his own rough and informal curriculum, and his brief stint at teaching suggests that Whitman employed what were then progressive techniques -- encouraging students to think aloud rather than simply recite, and involving his students in educational games.
Loading...
or support indie stores by buying on