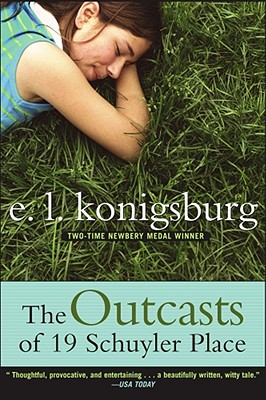 The Outcasts of 19 Schuyler Place

That's Margaret Rose Kane's response to every activity she's asked to participate in at the summer camp to which she's been exiled while her parents are in Peru. So Margaret Rose is delighted when her beloved uncles rescue her from Camp Talequa, with its uptight camp director and cruel cabinmates, and bring her to stay with them at their wonderful house at 19 Schuyler Place.

But Margaret Rose soon discovers that something is terribly wrong at 19 Schuyler Place. People in their newly gentrified neighborhood want to get rid of the three magnificent towers the uncles have spent forty-five years lovingly constructing of scrap metal and shards of glass and porcelain. Margaret Rose is outraged, and determined to strike a blow for art, for history, and for individuality...and no one is more surprised than Margaret Rose at the allies she finds for her mission.

Praise For The Outcasts of 19 Schuyler Place…

"A thing of strange beauty."

"Konigsburg at her masterful best."