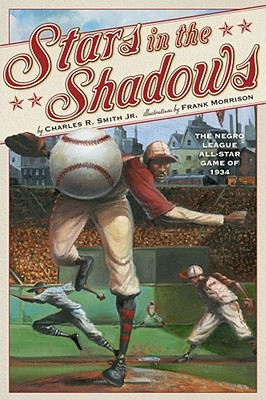 Stars in the Shadows (Hardcover)

The Negro League All-Star Game of 1934

1934, Chicago. Come step back in time to witness the best of the best Negro League players take each other on in one of the most fascinating All-Star ballgames in American history.

Stars in the Shadows is a must-have for any baseball aficionado or anyone interested in forgotten history. Beautifully packaged and with incredible black-and-white illustrations by Frank Morrison, this is a rare and extraordinary book.

Charles R. Smith, Jr. is an acclaimed poet and the Coretta Scott King Award-winning illustrator of My People, a picture book based on the poem by Langston Hughes. He is also the illustrator of If, the author and photographer of I Am the World, and he won the Coretta Scott King Author Honor for his book Twelve Rounds To Glory. He grew up in California and attended the Brooks Institute of Photography. A magazine and book cover photographer in addition to a picture book creator, Charles lives with his wife and kids in Poughkeepsie, New York. Visit him at CharlesRSmithJr.com.

Frank Morrison is the award-winning illustrator of many books for young readers, including Jazzy Miz Mozetta, winner of the Coretta Scott King/John Steptoe Award for New Talent; Little Melba and Her Big Trombone, a Coretta Scott King Illustrator Honor book; Muhammad Ali; and How Sweet the Sound. Before becoming a children’s book illustrator and fine artist, Morrison toured the globe as a break-dancer. He lives in Georgia with his family.

Praise For Stars in the Shadows: The Negro League All-Star Game of 1934…

“Baseball fans will feel they are at the ballpark when they read this account of the second annual Negro Leagues’ East-West game. The illustrations bring to mind the past and an Author’s Note explains the origin of the game. Fan favorites included Cool Papa Bell, Jimmie Crutchfeld, Oscar Charleston, Stachel Paige, Turkey Stearnes, and Mule Suttles. This book would be a wonderful read-aloud, as students will get the feel of the broadcast even more.”—Library Media Connection

“Writing in snappy rhymed couplets, Smith delivers a play-by-play, inning-by-inning account of the second annual East-West Classic, held in Chicago in 1934, an all-star face-off between the best players from the Negro League. Working in graphite, Morrison contributes full-bleed and spot illustrations of dynamic, athletic players in motion.”—Publishers Weekly

“Use this book as an exciting complement to Kadir Nelson’s We Are the Ship.”—Booklist
or support indie stores by buying on
Copyright © 2020 American Booksellers Association