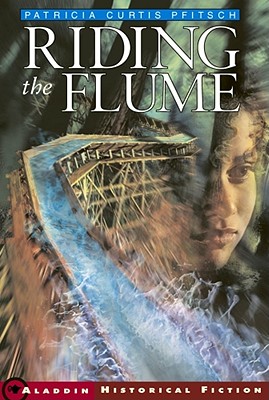 Don't tell anyone -- the only safety is in secrecy.
During the summer of 1894 the giant sequoia trees -- the oldest living things on earth -- are being felled for lumber in northern California. When fifteen-year-old Francie finds a note hidden in the stump of an old sequoia, she immediately recognizes her sister's handwriting. But Carrie died in an accident six years ago. Could Carrie's secret still be important?
Francie's search for the truth turns dangerous, and she needs to get to St. Joseph fast. She's faced with the choice of either giving up, or riding the flume, a rickety track that carries lumber from the mills in the mountains to the lumberyard in St. Joseph. Should Francie risk her life for the secret her sister fought to keep?

Praise For Riding the Flume…

Booklist Pfitsch brings together a brave heroine, authentic background, and an intriguing view of a little-known part of U.S. history to make this a winner.

Patricia Curtis Pfitsch lives on a ridge-top farm in southwest Wisconsin with her partner, Jack, their dog, Gaea, and two annoying but lovable cats. They have three grown children, Hollis, Woody, and Jane. Ms. Pfitsch's award-winning stories and articles have appeared in various children's magazines, including Highlights and Cricket. She is also the author of Keeper of the Light and The Deeper Song.

"I was fascinated when I found out that the giant sequoias in California live to be thousands of years old," writes Patricia Curtis Pfitsch. "But I was horrified when I learned that in the 1890s, thousands of sequoias were cut down, even though their wood was so brittle that more than half of the trees shattered when they fell. Why would humans waste the long lives of such beautiful and ancient creatures? In my search for the answer to that question, Riding the Flume was born."
Loading...
or
Not Currently Available for Direct Purchase