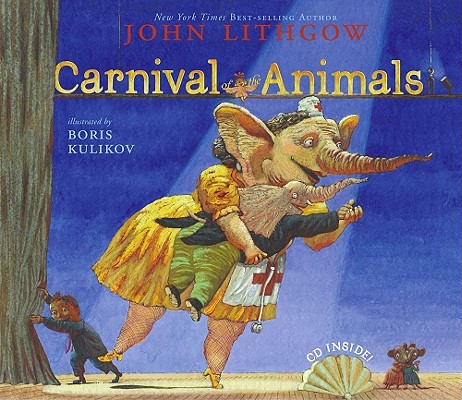 Carnival of the Animals (Hardcover)

But oh! what a fabulous night he had had,
When his world was turned into a zoo!
After wandering off from a school field trip, a young boy falls asleep in the Natural History Museum. There he sees his classmates, teachers, and family transformed into a menagerie of animals, from wild hyenas to stately peacocks.
John Lithgow's exhilarating word play, inspired by Camille Saint-Saëns's 1886 composition, provides a narrative arc to the piece for the first time. Lithgow created the text for the New York City Ballet, where the Carnival of the Animals ballet, with his narration, debuted in 2003. Boris Kulikov's witty artistic interpretation of the story adds to the fun.
A new recording of Saint-Saëns's suite, performed by Chamber Music Los Angeles under the direction of Bill Elliott, complete with John Lithgow's recitation of the text, is included on an enclosed CD.

Boris Kulikov, a former set and costume designer in St. Petersburg, Russia, was chosen as a Flying Start by Publishers Weekly. He has also illustrated Morris the Artist by Lore Segal, The Perfect Friend by Yelena Romanova, and Carnival of Animals by John Lithgow. He lives in Brooklyn, New York.
or
Buy Here
Copyright © 2020 American Booksellers Association