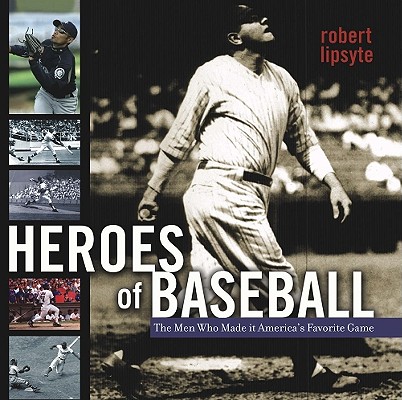 The Men Who Made It America's Favorite Game

Their names echo through the halls of time and the National Baseball Hall of Fame. Their feats are legendary. They never quit, and they never backed down. They inspired generations of Americans to push themselves to do their very best. They were, and remain, the heroes of baseball.

Hitting monster home runs, pitching perfect games, making impossible catches, and stealing home during the World Series -- these are the kinds of feats that turn baseball players into baseball superstars. But it takes more than great feats to become a hero of the game.

Every generation needs its own heroes, and in each generation that need is answered differently. Heroes reflect the times and societies in which they live and work. The impact made by baseball's heroes affects the way our society perceives itself, as well as the goals we set for ourselves and for our nation. Award-winning sportswriter Robert Lipsyte presents his vision for who the heroes of the game are, and what they did to achieve their legendary status.

Robert Lipsyte is the author of The Contender and its two sequels, The Brave and The Chief. The Contender was one of the first novels to take a realistic look at teenagers and has been required reading in many American school systems for more than thirty years. Recognizing the importance of that book as well as his other works, ALA honored Lipsyte with the Margaret A. Edwards Award in 2001. For decades, Lipsyte was an award-winning sports reporter for the New York Times. Born and raised in New York, Lipsyte is a lifelong fan of baseball. In fact, as a young sportswriter covering the city's new franchise in 1962, Lipsyte briefly tried out for the New York Mets. He refers to it as "a great learning experience." Lipsyte's other sports books for young adults include biographies of Jim Thorpe, Joe Louis, and Arnold Schwarzenegger. Mr. Lipsyte still lives in New York City.

Praise For Heroes of Baseball: The Men Who Made It America's Favorite Game…

"A thoroughly entertaining book that reveals stories I had never heard before -- about baseball and our country. A sneaky way to teach history." -- Jim Bouton, former Yankees pitcher and author of Ball Four

"Robert Lipsyte is the very best at what he does: he writes about what's important while entertaining you all the way. No other sport has a history like baseball. This book is a marvel as the stars of the game come alive in words and rare photos. If you want to meet the men who have made America's Pastime great, here's the book for you." -- Peter Golenbock, author of Red Sox Nation and Hank Aaron: Brave in Every Way
or
Not Currently Available for Direct Purchase
Copyright © 2020 American Booksellers Association