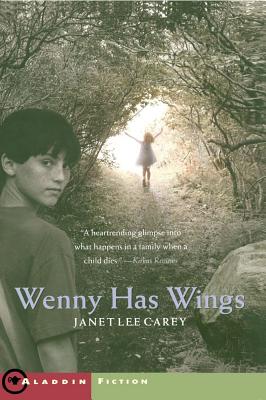 In the fight with the truck barreling toward them, Wenny and Will lost big. Wenny lost her life. Will lost a sister -- and lost faith in himself.
But then Will starts writing letters to Wenny. He tells her all about the secret of his near-death experience, and the troubles he's having at home. Some letters are funny. Some letters are harsh. And when read together, they tell the story of a boy who finds a way to move past death and learns how to live again....

Praise For Wenny Has Wings…

Kirkus Reviews A heartrending glimpse into what happens in a family when a child dies.

JANET LEE CAREY grew up in Marin County California surrounded by whispering redwoods. Sunlight cut through ocean mist and fingered through the branches. It was in this magical place that she first dreamed of writing books. Her award-winning teen fantasy novels are translated into many languages. Some include: The Dragons of Noor, which won a Teens Read Too Gold Star Award for Excellence, Stealing Death, which received a School Library Journal starred review, Dragon’s Keep, an ALA Best Books for Young Adults, and Wenny Has Wings, a Mark Twain Award recipient and a Sony Feature Film Japan, 2008. Janet lives with her family, dusty book stacks, and imperious cat near Phantom Lake in Washington. Visit Janet online at www.janetleecarey.com.
Loading...
or support indie stores by buying on