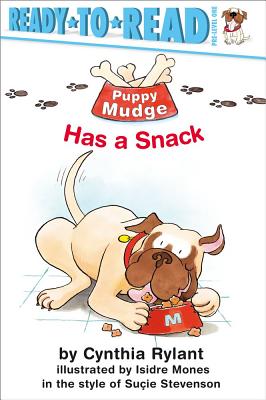 Puppy Mudge Has a Snack (Paperback)

Henry's puppy, Mudge, loves to eat. He really wants to share Henry's snack. Henry keeps saying, "No, Mudge!" But it's hard to resist a puppy as cute as Mudge!

Cynthia Rylant is the author of more than 100 books for young people, including the beloved Henry and Mudge, Annie and Snowball, Brownie & Pearl, and Mr. Putter & Tabby series. Her novel Missing May received the Newbery Medal. She lives in Lake Oswego, Oregon. Visit her at CynthiaRylant.com.

Isidre Monés is a Spanish artist best known for his comic book work. In addition to illustrating Cloudy with a Chance of Meatballs 3, he has also illustrated several of Cynthia Rylant’s Henry and Mudge stories.

Suçie Stevenson is the acclaimed author and illustrator of more than fifty books for children and is best known as the illustrator of the popular Henry and Mudge books by Cynthia Rylant. She lives on Cape Cod, Massachusetts, with her little cocker spaniel, Gracie.
or support indie stores by buying on
Copyright © 2020 American Booksellers Association