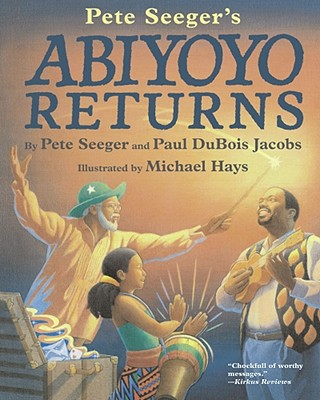 After Abiyoyo the giant left, the small town he had bothered grew by leaps and bounds. The boy who helped his father make Abiyoyo disappear grew older and became a father, too. The people were filled with new life and spirit. But now there are new dangers: droughts and floods. The town needs a dam before it gets washed away. And sitting right where the dam would be is a boulder too big for anyone to move. Anyone, that is, except Abiyoyo.
Father still has his courage. Grandfather still has his magic wand. And his granddaughter knows he can bring Abiyoyo back, then make him disappear. But Abiyoyo is dangerous. People think the giant will eat them. Will lots of good food and beautiful songs keep Abiyoyo happy long enough to move the boulder and once again leave the town in peace?

Michael Hays has illustrated several picture books, including the sequel to Abiyoyo, Abiyoyo Returns. He lives in Chicago, Illinois.