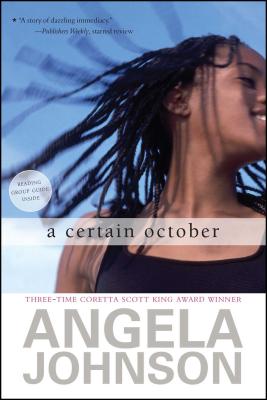 From three-time Coretta Scott King Award–winner Angela Johnson, a wrenching, honest book about surviving the unimaginable and finding a way to go on.

Scotty compares herself to tofu: no flavor unless you add something. And it’s true that Scotty’s friends, Misha and Falcone, and her brother, Keone, make life delicious. But when a terrible accident occurs, Scotty feels responsible for the loss of someone she hardly knew, and the world goes wrong. She cannot tell what is a dream and what is real. Her friends are having a hard time getting through to her and her family is preoccupied with their own trauma. But the prospect of a boy, a dance, and the possibility that everything can fall back into place soon helps Scotty realize that she is capable of adding her own flavor to life.

With artfully spare prose, acclaimed and award-winning author Angela Johnson explores the ramifications of unexpected death in this compelling coming-of-age story. An ALA Best Fiction for Young Adults pick.

Praise For A Certain October…

*"[A Certain October] provides raw and honest insight into all of the emotions the teen is experiencing…This fast-paced, well-crafted novel is capable of engaging even the most reluctant readers."
--SLJ, starred review

*“This slim book looks like it will be a quick read, but it turns out to be much more demanding—and rewarding—due to the story’s complex structure and the author’s gift for showing, not telling.”
--The Horn Book, starred review

*"A story of dazzling immediacy…Realistic dialogue and a cast of vibrant characters give lively texture to Johnson's nonlinear narrative. Through minimal exposition and Scotty's singular voice, Johnson gracefully explores life's defining moments, whether painful or bittersweet, and how the world carries on, even when everything has changed."
— Publishers Weekly, starred review

Angela Johnson has won three Coretta Scott King Awards, one each for her novels The First Part Last, Heaven, and Toning the Sweep. The First Part Last was also the recipient of the Michael L. Printz Award. She is also the author of the novels Looking for Red and A Certain October. Her books for younger readers include the Coretta Scott King Honor Book When I Am Old with You, illustrated by David Soman; Wind Flyers and I Dream of Trains, both illustrated by Loren Long; and Lottie Paris Lives Here and its sequel Lottie Paris and the Best Place, both illustrated by Scott M. Fischer. Additional picture books include A Sweet Smell of Roses, Just Like Josh Gibson, The Day Ray Got Away, and All Different Now. In recognition of her outstanding talent, Angela was named a 2003 MacArthur Fellow. She lives in Kent, Ohio. Visit her at AJohnsonAuthor.com.
or support indie stores by buying on
(This book is on backorder)