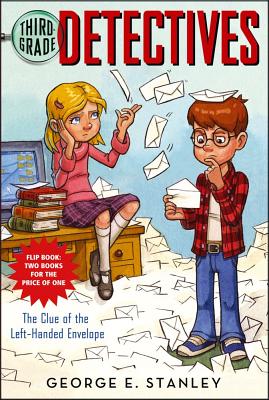 Mr. Merlin's Third Graders are known as the Third Grade Detectives -- with some hints from secret code clues and help from Mr. Merlin's friend, the police scientist Dr. Smiley, they help solve cases. This two-in-one flip book contains the full text and illustrations for the first two Third Grade Detectives books. In their first case, The Clue of the Left-Handed Envelope, the Detectives find out who has been sending Amber Lee anonymous letters. And in their next case, a dirty handkerchief provides a clue to who's been trespassing in Todd's tree house.

George Stanley was a Professor of African and Middle-Eastern Languages and Linguistics at Cameron University. In between prepping class lectures and grading papers, he found the time to write for children. He was also the author of Night Fires and the Third-Grade Detectives series.
Loading...
or support indie stores by buying on