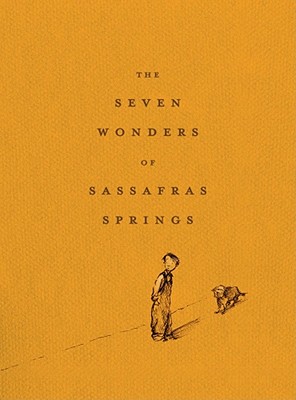 The Seven Wonders of Sassafras Springs

When Eben McAllister reads about the Seven Wonders of the World, he longs to escape the small farming community of Sassafras Springs and do some exploring f his own. No one else ever seems to want to leave Sassafras however -- not even his best pal, Jeb -- and so, for now, Eben figures he's stuck on the farm with Pa and Aunt Pretty until he grows up.
All that changes when his pa, tired of Eben's moping, challenges him to find Seven Wonders in Sassafras Springs that can stang up to the real Seven Wonders of the World. And if he does? Then Eben will get the adventure he's been craving for -- a trip out West. Eben doesn't reckon he'll have any luck -- he can't think of even one thing that would be called "interesting," let along wonderous, in Sassafras, but he figures he'll give it a try; there's nothing else to do in Sassafras anyway.
While his mission puzzles and annoys some of his friends and neighbors, Eben perseveres, little knowing that he is in for a big surprise. For what with a singing saw, a floating table, and a truth-telling loom (just to name a few), the Wonders Eben will discover among his neighbors, friends, and family will give him the adventure of a lifetime...without his ever leaving home.
Told in a down-home narrative with glimmers of magical realism woven throughout, and illustrated with sumptuous drawings by Matt Phelan, Betty G. Birney's tale about a boy's journey of discovery reminds us all that extraordinary things can happen in the most ordinary of places...even in Sassafras Springs.

Praise For The Seven Wonders of Sassafras Springs…

Betty G. Birney is an Emmy-winning screenwriter who specializes in live-action TV, and animation for children. She lives with her family in Studio City, California.

Matt Phelan's black-and-white illustrations first appeared in The Seven Wonders of Sassafras Springs by Betty G. Birney. His picture books include The New Girl...and Me and Two of a Kind, both written by Jacqui Robbins. Matt lives in Philadelphia, Pennsylvania.
Loading...
or
Not Currently Available for Direct Purchase