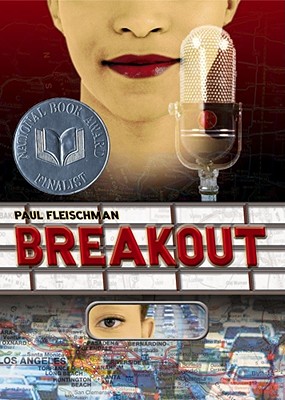 Del's lived in Los Angeles for seventeen years, bouncing among foster homes. Smart, sharp-tongued, and a master mimic, she's fed up with her world and with being Del. So she's changing her name and leaving both herself and L.A. behind -- until her escape lands her in an all-day traffic jam.
Fast-forward eight years. It's opening night for the one-woman show Del has written and is starring in -- a show called Breakout about a Los Angeles traffic jam.
As the novel flashes between Del's present and future, we get a backstage pass into this young playwright's psyche, watching her life being transformed into art, heartache into comedy, solitude into connection. And, finally, anger giving way to acceptance.

"Fleischman's artful structure, distinctive voices, and carefully chosen details make this a splendid choice for teens on the verge of a breakout of their own."
-- School Library Journal, starred review