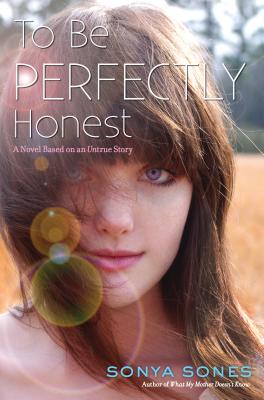 To Be Perfectly Honest

A Novel Based on an Untrue Story

Can honesty lead to heartbreak if the truth is subjective? A compelling novel in verse from Sonya Sones.

Her friends
have a joke about her:
How can you tell if Colette is lying?

Her mouth is open.

Fifteen-year-old Colette is addicted to lying. Her shrink says this is because she’s got a very bad case of Daughter-of-a-famous-movie-star Disorder—so she lies to escape out from under her mother’s massive shadow. But Colette doesn’t see it that way. She says she lies because it’s the most fun she can have with her clothes on. Not that she’s had that much fun with her clothes off. At least not yet, anyway…

When her mother drags her away from Hollywood to spend the entire summer on location in a boring little town in the middle of nowhere, Colette is less than thrilled. But then she meets a sexy biker named Connor. He’s older, gorgeous, funny, and totally into her. So what if she lies to him about her age, and about who her mother is? I mean, she has to keep her mother’s identity a secret from him. If he finds out who she really is, he’ll forget all about Colette, and start panting and drooling and asking her for her mother’s autograph. Just like everyone always does.

Praise For To Be Perfectly Honest: A Novel Based on an Untrue Story…

"Sones captures the ache of first love. Readers may find themselves laughing, crying, and wanting to believe the unreliable, well-developed narrator...Fast paced and great for reluctant readers."
— School Library Journal

"Readers will be easily drawn in as Sones convincingly relates story after story before revealing that many events were skillfully fabricated by Colette. The well-crafted verse speeds along fluidly...Many readers will recognize their own lives as Connor dramatically beats Colette at her own game and teaches her essential life lessons about vulnerability, honesty, and self-discovery."
— Booklist

"Sones has perfected the art of the verse novel...Sones writes with such an intriguing and effortless style that I flew through 50 pages without even realizing it."
— TeenReads.com

"Readers will relate to the ups and downs of a new romance, the disappointment of unanswered texts and a phone that won’t ring, the elation of stolen kisses, and the angst of deciding how far to go physically...a light-hearted take on disappointed romance for readers with active fantasy lives of their own."
— BCCB

Sonya Sones has written five YA novels-in-verse: To Be Perfectly Honest (A Novel Based on an Untrue Story), Stop Pretending, One of Those Hideous Books Where the Mother Dies, What My Mother Doesn’t Know, and its companion, What My Girlfriend Doesn’t Know. Her books have received many honors, including a Christopher Award, the Myra Cohn Livingston Poetry Award, and a Los Angeles Times Book Prize nomination. But the coolest honor she ever got was when What My Mother Doesn’t Know made it onto the American Library Association’s list of the Top 100 Most Banned Books of the Decade (to see why, see p.46). She lives near the beach in southern California, and only tells the occasional fib. Visit her at SonyaSones.com or follow @SonyaSones on Twitter.
Loading...
or
Not Currently Available for Direct Purchase