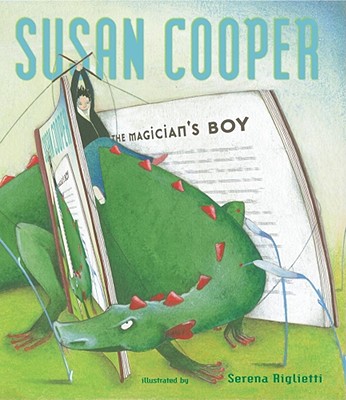 A Boy works for a Magician.
The Boy polishes the Magician's wands, and catches the rabbits that the Magician pulls out of hats. But the Boy's favorite job is operating the puppets for the Magician's famous puppet play, "Saint George and the Dragon" -- until one terrible day when, in the middle of a performance, the Boy can't find the Saint George puppet. The Magician is furious. He points a long magical finger at the Boy, and -- poof! -- the Boy is suddenly in the strange Land of Story, where he must find Saint George.
The Boy's hunt for Saint George is full of adventures with oddly familiar people. He saves the Old Woman Who Lived in a Shoe from losing her children; he spoils the wolf's plan to eat Little Red Riding Hood; and he narrowly escapes being eaten by the Giant at the top of Jack's beanstalk. But the Boy's last adventure is the most amazing of all -- and changes his life forever. No child who reads this delightful tale by master storyteller Susan Cooper is likely to forget it.

Serena Riglietti has illustrated many books for children worldwide, including the Italian editions of the Harry Potter series. She lives with her family in Italy. For more information visit her Web site at www.serenariglietti.it.
or
Not Currently Available for Direct Purchase
Copyright © 2020 American Booksellers Association