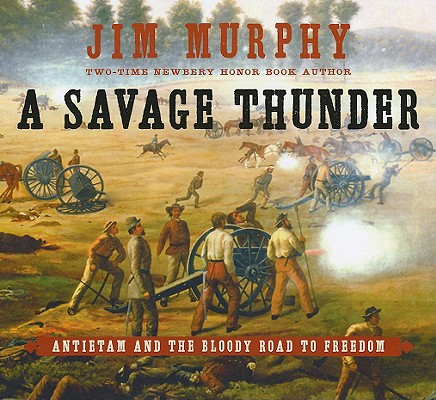 Antietam and the Bloody Road to Freedom

In September 1862, two great armies faced off across Antietam Creek, near Sharpsburg, Maryland, knowing that the fate of the United States and the future of millions of slaves were at stake. From behind-the-scenes conversations to the action on the front lines, renowned nonfiction writer Jim Murphy provides an in-depth look at the battle that prompted Abraham Lincoln to issue the Emancipation Proclamation and changed America forever. Murphy uses photographs, maps, and first-person accounts to sweep young readers into the chaos and confusion of battle. Gritty and utterly engaging, this is a powerful portrayal of a day on which 22,717 people were killed or wounded--the single bloodiest day in American history.

Praise For A Savage Thunder: Antietam and the Bloody Road to Freedom…

"Replete with excellent-quality archival photos, reproductions, and maps, this is an outstanding account of a battle that was truly a savage thunder. " -- School Library Journal, starred review

"...what makes this impassioned volume speak -- literally -- are the many primary-source quotations of those involved, from the least to the most." -- Kirkus, starred review

Jim Murphy is the author of more than thirty books about American history, including An American Plague: The True and Terrifying Story of the Yellow Fever Epidemic of 1793 and The Great Fire, both Newbery Honor Books. He lives with his wife and their two sons in Maplewood, New Jersey. For more information visit his website at jimmurphybooks.com.
Loading...
or support indie stores by buying on