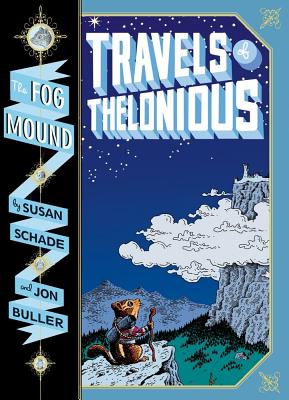 In ancient times human beings ruled the Earth -- at least that's what the old legends claim. But is it true?

Thelonious Chipmunk is a Talker -- an animal who has inherited the gift of language -- and he, for one, believes in humans. Who else could have made the old paper postcard he treasures? His desire to know more about humans is fulfilled in a surprising and dangerous way when Thelonious is swept down the river into a strange new world -- a world where gangs and warlords prowl amongst the crumbling remains of civilization.

With three new companions, -- a bear, a porcupine, and a lizard -- Thelonious embarks on a search for the far-off Fog Mound. It is a journey that becomes nothing less than a quest to uncover the secrets of Earth's past.

Using alternate chapters of graphic novel and straight text, Susan Schade and Jon Buller have combined their writing and illustrating talents to create a book in which the form truly reflects the excitement and adventure of the story. Young readers, whether they have discovered graphic novels or not, will find this book a visual and reading delight.