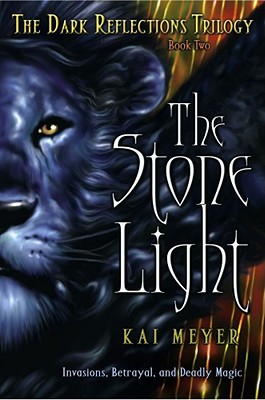 Evil forces have invaded Venice - the city that Merle and Serafin call home. Luckily, the two friends hold secrets that just might stop the pharaoh from destroying their ancient city. Merle has within her spirit of the Flowing Queen, a mysterious legendary force who serves as her guide. Indeed, the Queen's voice has led Merle to Vermithrax, a winged stone lion. And together they are on a mission to Hell to enlist help from Lord Light. Meanwhile, Serafin remains in Venice. He's joined a group of rebel boys who are plotting to assassinate the pharaoh. But can a group so small really kill the biggest, most powerful man on earth? Though they follow separate courses, Merle and Serafin will both encounter unexpected betrayals and startling revelations. And together they learn that evil takes many shapes in the world of Dark Reflections.

Kai Meyer is the author of many highly acclaimed and popular books for adults and young adults in his native Germany. Pirate Curse, the first book in the Wave Walkers trilogy, was praised by Booklist as a fast-paced fantasy featuring plenty of action and suspense. The Water Mirror, the first book in the Dark Reflections Trilogy, was named a School Library Journal Best Book, a Locus Magazine Recommended Read, a Book Sense Children's Pick, and a New York Public Library Book for the Teen Age. It received starred reviews in both School Library Journal and Publishers Weekly. School Library Journal has called Meyer an expert at creating fantastical worlds filled with unusual and exotic elements. For more information please visit his website at www.kaimeyer.co
Loading...
or
Not Currently Available for Direct Purchase