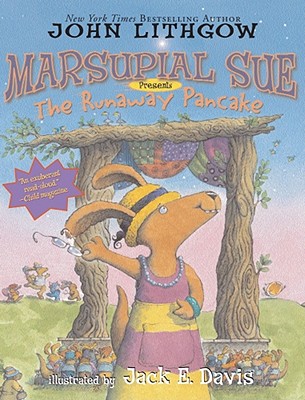 “I'm too fast, you're too slow. Pan, pan, patty-cake pan, I can get away from you, I can!”
The much-loved story of the Runaway Pancake who pops out of the oven and is sure he can escape all who want to eat him is given a new spin when Marsupial Sue and her friends put on a play version for their neighborhood. This has all of the wit and whimsy of Marsupial Sue and again features lively illustrations by Jack E. Davis. From the friends’ preparations behind the scenes to the actors’ final bows, readers will be inspired by the production.

Jack E. Davis was senior art director with a a large ad agency before becoming a children's book illustrator. Among the books he has illustrated are Bedhead by Margi Palatini, Metro Cat by Marsha Diane Arnold, Music Over Manhattan by Mark Karlins, and the ongoing series The Zack Files by Dan Greenburg. He lives in Port Townsend, Washington, and has three sons and two cats.
or
Not Currently Available for Direct Purchase
Copyright © 2020 American Booksellers Association