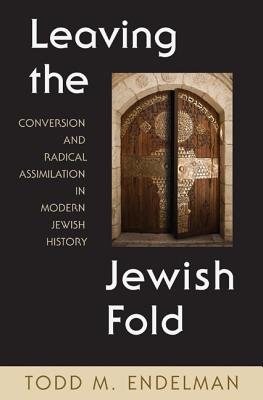 Between the French Revolution and World War II, hundreds of thousands of Jews left the Jewish fold--by becoming Christians or, in liberal states, by intermarrying. Telling the stories of both famous and obscure individuals, Leaving the Jewish Fold explores the nature of this drift and defection from Judaism in Europe and America from the eighteenth century to today. Arguing that religious conviction was rarely a motive for Jews who became Christians, Todd Endelman shows that those who severed their Jewish ties were driven above all by pragmatic concerns--especially the desire to escape the stigma of Jewishness and its social, occupational, and emotional burdens.

Through a detailed and colorful narrative, Endelman considers the social settings, national contexts, and historical circumstances that encouraged Jews to abandon Judaism, and factors that worked to the opposite effect. Demonstrating that anti-Jewish prejudice weighed more heavily on the Jews of Germany and Austria than those living in France and other liberal states as early as the first half of the nineteenth century, he reexamines how Germany's political and social development deviated from other European states. Endelman also reveals that liberal societies such as Great Britain and the United States, which tolerated Jewish integration, promoted radical assimilation and the dissolution of Jewish ties as often as hostile, illiberal societies such as Germany and Poland.

Bringing together extensive research across several languages, Leaving the Jewish Fold will be the essential work on conversion and assimilation in modern Jewish history for years to come.

Todd M. Endelman is professor emeritus of history and Judaic studies at the University of Michigan. His books include "The Jews of Britain" and "Broadening Jewish History."
or support indie stores by buying on