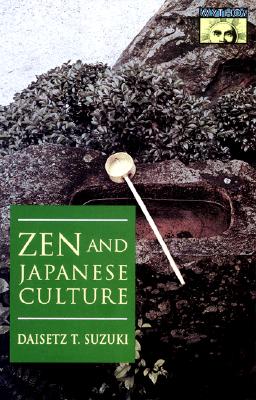 One of this century's leading works on Zen, this book is a valuable source for those wishing to understand its concepts in the context of Japanese life and art. In simple, often poetic, language, Daisetz Suzuki describes what Zen is, how it evolved, and how its emphasis on primitive simplicity and self-effacement have helped to shape an aesthetics found throughout Japanese culture. He explores the surprising role of Zen in the philosophy of the samurai, and subtly portrays the relationship between Zen and swordsmanship, "haiku," tea ceremonies, and the Japanese love of nature. Suzuki's contemplative discussion is enhanced by anecdotes, poetry, and illustrations showing silk screens, calligraphy, and examples of architecture.

Daisetz T. Suzuki, Japan's foremost authority on Zen Buddhism and author of over a hundred books on the subject, died in Tokyo in 1966 at the age of 95. He befriended and influenced such thinkers as C. G. Jung, Erich Fromm, Martin Heidegger, Karl Jaspers, Arnold Toynbee, Gabriel Marcel, Herbert Read, and Thomas Merton.
or
Not Currently Available for Direct Purchase
Copyright © 2020 American Booksellers Association