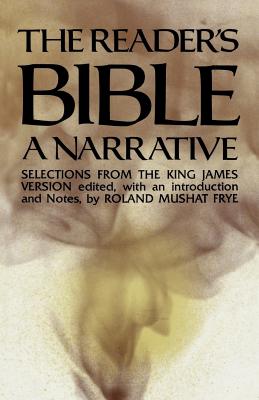 The Reader's Bible, a Narrative

Selections from the King James Version

Understanding the Bible as an account of the unfolding revelation of God to humankind through history, Roland Mushat Frye suggests that the many sub-plots, monologues, and reflections of the Bible compose a coherent story that continues through both the Old and New Testaments. "The convictions of the Bible, to be sure, are the convictions of religion and ethics," he writes, "but the methods are the methods of literature." Carefully arranging a selection of excerpts that comprise approximately one-fourth of the entire Bible, he enables the reader to follow chronologically the main narrative as well as the most significant asides. With introductory and explanatory material providing transition and background information, the reader progresses from book to book as from chapter to chapter in a novel. Thus, this is called The Reader's Bible because it may be read as a narrative, as a story that unifies consecutive events through which the character of God gradually unfolds.

God first appears in the opening of Genesis with the creation of the universe; against this backdrop the human drama is played. We see Everyman and Everywoman endowed with a life in harmony as long as they accept the primacy of God. When they repudiate this primacy, chaos replaces harmony and they find themselves in a wilderness rather than in a garden. God then turns from the attempt to create a righteous and peaceful order for all of humanity to a concentration on one segment of humanity-the race of Abraham--for the development of a conception of human personality and community that may serve as a pattern for all human beings. Professor Frye writes that however miraculous the entrances of God upon the stage may appear to be, they do constitute entrances into ordinary human affairs. These encounters Invite us to look both within and beyond them to what they reveal about God and about ourselves. Concerned with the matter of living here and hereafter, the different biblical histories and stories are brought together to provide cumulative insight into human nature and destiny.

Roland Mushat Frye (1922-2005) was Felix E. Schelling Professor of English at the University of Pennsylvania and editor of Is God a Creationist? The Religious Case Against Creation-Science.
Loading...
or support indie stores by buying on