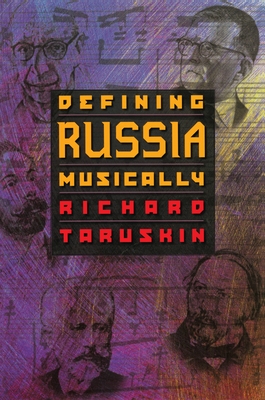 The world-renowned musicologist Richard Taruskin has devoted much of his career to helping listeners appreciate Russian and Soviet music in new and sometimes controversial ways. Defining Russia Musically represents one of his landmark achievements: here Taruskin uses music, together with history and politics, to illustrate the many ways in which Russian national identity has been constructed, both from within Russia and from the Western perspective. He contends that it is through music that the powerful myth of Russia's "national character" can best be understood. Russian art music, like Russia itself, Taruskin writes, has "always been] tinged or tainted ... with an air of alterity--sensed, exploited, bemoaned, reveled in, traded on, and defended against both from within and from without." The author's goal is to explore this assumption of otherness in an all-encompassing work that re-creates the cultural contexts of the folksong anthologies of the 1700s, the operas, symphonies, and ballets of the 1800s, the modernist masterpieces of the 1900s, and the hugely fraught but ambiguous products of the Soviet period.

Taruskin begins by showing how enlightened aristocrats, reactionary romantics, and the theorists and victims of totalitarianism have variously fashioned their vision of Russian society in musical terms. He then examines how Russia as a whole shaped its identity in contrast to an "East" during the age of its imperialist expansion, and in contrast to two different musical "Wests," Germany and Italy, during the formative years of its national consciousness. The final section, expanded from a series of Christian Gauss seminars presented at Princeton in 1993, focuses on four individual composers, each characterized both as a self-consciously Russian creator and as a European, and each placed in perspective within a revealing hermeneutic scheme. In the culminating chapters--Chaikovsky and the Human, Scriabin and the Superhuman, Stravinsky and the Subhuman, and Shostakovich and the Inhuman--Taruskin offers especially thought-provoking insights, for example, on Chaikovsky's status as the "last great eighteenth-century composer" and on Stravinsky's espousal of formalism as a reactionary, literally counterrevolutionary move.

Richard Taruskin, Professor of Music at the University of California, Berkeley, is a regular contributor to New Republic, The New York Times, The New York Review of Books, Opera News, and many scholarly publications. His books include Opera and Drama in Russia, Stravinsky and the Russian Traditions, and Musorgsky: Eight Essays and an Epilogue, now available through Princeton University Press in paperback.
or
Buy Here
Copyright © 2020 American Booksellers Association