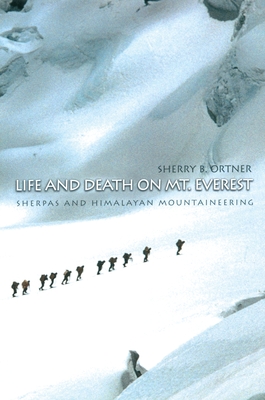 Life and Death on Mt. Everest

The Sherpas were dead, two more victims of an attempt to scale Mt. Everest. Members of a French climbing expedition, sensitive perhaps about leaving the bodies where they could not be recovered, rolled them off a steep mountain face. One body, however, crashed to a stop near Sherpas on a separate expedition far below. They stared at the frozen corpse, stunned. They said nothing, but an American climber observing the scene interpreted their thoughts: Nobody would throw the body of a white climber off Mt. Everest.

For more than a century, climbers from around the world have journ-eyed to test themselves on Everest's treacherous slopes, enlisting the expert aid of the Sherpas who live in the area. Drawing on years of field research in the Himalayas, renowned anthropologist Sherry Ortner presents a compelling account of the evolving relationship between the mountaineers and the Sherpas, a relationship of mutual dependence and cultural conflict played out in an environment of mortal risk. Ortner explores this relationship partly through gripping accounts of expeditions--often in the climbers' own words--ranging from nineteenth-century forays by the British through the historic ascent of Hillary and Tenzing to the disasters described in Jon Krakauer's Into Thin Air. She reveals the climbers, or "sahibs," to use the Sherpas' phrase, as countercultural romantics, seeking to transcend the vulgarity and materialism of modernity through the rigor and beauty of mountaineering. She shows how climbers' behavior toward the Sherpas has ranged from kindness to cruelty, from cultural sensitivity to derision. Ortner traces the political and economic factors that led the Sherpas to join expeditions and examines the impact of climbing on their traditional culture, religion, and identity. She examines Sherpas' attitude toward death, the implications of the shared masculinity of Sherpas and sahibs, and the relationship between Sherpas and the increasing number of women climbers. Ortner also tackles debates about whether the Sherpas have been "spoiled" by mountaineering and whether climbing itself has been spoiled by commercialism.

Sherry B. Ortner is Professor of Anthropology at Columbia University. She is the author of two previous books on the Sherpas of Nepal, Sherpas through Their Rituals and High Religion: A Cultural and Political History of Sherpa Buddhism (Princeton), and has also written books on social, cultural, and feminist theory. She has received numerous prestigious awards, including the John D. and Catherine T. MacArthur Foundation Fellowship.
Loading...
or support indie stores by buying on