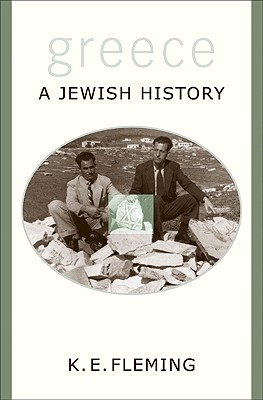 K. E. Fleming's Greece--a Jewish History is the first comprehensive English-language history of Greek Jews, and the only history that includes material on their diaspora in Israel and the United States. The book tells the story of a people who for the most part no longer exist and whose identity is a paradox in that it wasn't fully formed until after most Greek Jews had emigrated or been deported and killed by the Nazis.

For centuries, Jews lived in areas that are now part of Greece. But Greek Jews as a nationalized group existed in substantial number only for a few short decades--from the Balkan Wars (1912-13) until the Holocaust, in which more than 80 percent were killed. Greece--a Jewish History describes their diverse histories and the processes that worked to make them emerge as a Greek collective. It also follows Jews as they left Greece--as deportees to Auschwitz or migr's to Palestine/Israel and New York's Lower East Side. In such foreign settings their Greekness was emphasized as it never was in Greece, where Orthodox Christianity traditionally defines national identity and anti-Semitism remains common.

K. E. Fleming is professor of history and Alexander S. Onassis Professor of Hellenic Culture and Civilization at New York University, where she also serves as associate director of the Remarque Institute.
Loading...
or support indie stores by buying on