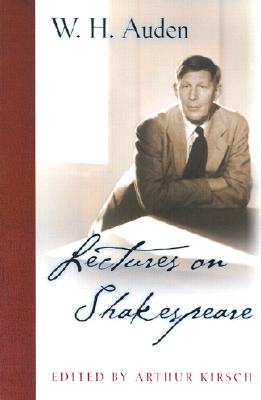 "W. H. Auden, poet and critic, will conduct a course on Shakespeare at the New School for Social Research beginning Wednesday. Mr. Auden has announced that in his course . . . he proposes to read all Shakespeare's plays in chronological order." The New York Times reported this item on September 27, 1946, giving notice of a rare opportunity to hear one of the century's great poets comment on one of the greatest poets of all time. Published here for the first time, these lectures now make Auden's thoughts on Shakespeare available widely.

Painstakingly reconstructed by Arthur Kirsch from the notes of students who attended, primarily Alan Ansen, who became Auden's secretary and friend, the lectures afford remarkable insights into Shakespeare's plays as well as the sonnets. A remarkable lecturer, Auden could inspire his listeners to great feats of recall and dictation. Consequently, the poet's unique voice, often down to the precise details of his phrasing, speaks clearly and eloquently throughout this volume. In these lectures, we hear Auden alluding to authors from Homer, Dante, and St. Augustine to Kierkegaard, Ibsen, and T. S. Eliot, drawing upon the full range of European literature and opera, and referring to the day's newspapers and magazines, movies and cartoons. The result is an extended instance of the "live conversation" that Auden believed criticism to be. Notably a conversation between Auden's capacious thought and the work of Shakespeare, these lectures are also a prelude to many ideas developed in Auden's later prose--a prose in which, one critic has remarked, "all the artists of the past are alive and talking among themselves." Reflecting the twentieth-century poet's lifelong engagement with the crowning masterpieces of English literature, these lectures add immeasurably to both our understanding of Auden and our appreciation of Shakespeare.

Arthur Kirsch, Alice Griffin Professor Emeritus at the University of Virginia, is the author of many books, including The Passions of Shakespeare's Tragic Heroes and Shakespeare and the Experience of Love, and the editor of several others.
Loading...
or
Not Currently Available for Direct Purchase