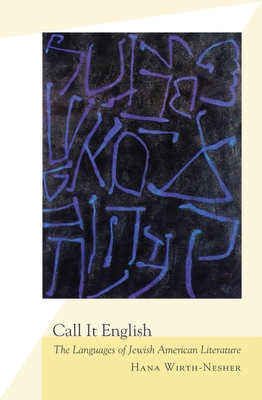 The Languages of Jewish American Literature

Call It English identifies the distinctive voice of Jewish American literature by recovering the multilingual Jewish culture that Jews brought to the United States in their creative encounter with English. In transnational readings of works from the late-nineteenth century to the present by both immigrant and postimmigrant generations, Hana Wirth-Nesher traces the evolution of Yiddish and Hebrew in modern Jewish American prose writing through dialect and accent, cross-cultural translations, and bilingual wordplay.

Call It English tells a story of preoccupation with pronunciation, diction, translation, the figurality of Hebrew letters, and the linguistic dimension of home and exile in a culture constituted of sacred, secular, familial, and ancestral languages. Through readings of works by Abraham Cahan, Mary Antin, Henry Roth, Delmore Schwartz, Bernard Malamud, Saul Bellow, Cynthia Ozick, Grace Paley, Philip Roth, Aryeh Lev Stollman, and other writers, it demonstrates how inventive literary strategies are sites of loss and gain, evasion and invention.

The first part of the book examines immigrant writing that enacts the drama of acquiring and relinquishing language in an America marked by language debates, local color writing, and nativism. The second part addresses multilingual writing by native-born authors in response to Jewish America's postwar social transformation and to the Holocaust.

A profound and eloquently written exploration of bilingual aesthetics and cross-cultural translation, Call It English resounds also with pertinence to other minority and ethnic literatures in the United States.

Hana Wirth-Nesher is the Samuel L. and Perry Haber Chair on the Study of the Jewish Experience in the United States, Professor of English, and head of the Goldreich Family Institute for Yiddish Language, Literature, and Culture at Tel Aviv University. She is the author of City Codes: Reading the Modern Urban Novel and the editor of What is Jewish Literature?, and coeditor of The Cambridge Companion to Jewish American Literature.
Loading...
or
Not Currently Available for Direct Purchase