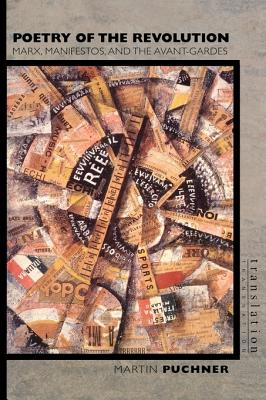 Poetry of the Revolution

Marx, Manifestos, and the Avant-Gardes (Translation/Transnation #15)

Poetry of the Revolution tells the story of political and artistic upheavals through the manifestos of the nineteenth and twentieth centuries. Ranging from the Communist Manifesto to the manifestos of the 1960s and beyond, it highlights the varied alliances and rivalries between socialism and repeated waves of avant-garde art. Martin Puchner argues that the manifesto--what Marx called the poetry of the revolution--was the genre through which modern culture articulated its revolutionary ambitions and desires. When it intruded into the sphere of art, the manifesto created an art in its own image: shrill and aggressive, political and polemical. The result was manifesto art--combinations of manifesto and art that fundamentally transformed the artistic landscape of the twentieth century.

Central to modern politics and art, the manifesto also measures the geography of modernity. The translations, editions, and adaptations of such texts as the Communist Manifesto and the Futurist Manifesto registered and advanced the spread of revolutionary modernity and of avant-garde movements across Europe and to the Americas. The rapid diffusion of these manifestos was made possible by networks--such as the successive socialist internationals and international avant-garde movements--that connected Santiago and Zurich, Moscow and New York, London and Mexico City. Poetry of the Revolution thus provides the point of departure for a truly global analysis of modernism and modernity.

Martin Puchner, is Associate Professor of English and Comparative Literature at Columbia University and author of Stage Fright: Modernism, Anti-Theatricality, and Drama. He is coeditor of Against Theatre: Creative Destructions on the Modernist Stage (2006), and The Norton Anthology of Drama (forthcoming).
Loading...
or support indie stores by buying on