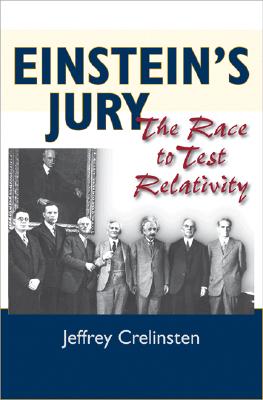 The Race to Test Relativity

Einstein's Jury is the dramatic story of how astronomers in Germany, England, and America competed to test Einstein's developing theory of relativity. Weaving a rich narrative based on extensive archival research, Jeffrey Crelinsten shows how these early scientific debates shaped cultural attitudes we hold today.

The book examines Einstein's theory of general relativity through the eyes of astronomers, many of whom were not convinced of the legitimacy of Einstein's startling breakthrough. These were individuals with international reputations to uphold and benefactors and shareholders to please, yet few of them understood the new theory coming from the pen of Germany's up-and-coming theoretical physicist, Albert Einstein. Some tried to test his theory early in its development but got no results. Others--through toil and hardship, great expense, and perseverance--concluded that it was wrong. A tale of international competition and intrigue, Einstein's Jury brims with detail gleaned from Crelinsten's far-reaching inquiry into the history and development of relativity. Crelinsten concludes that the well-known British eclipse expedition of 1919 that made Einstein famous had less to do with the scientific acceptance of his theory than with his burgeoning public fame. It was not until the 1920s, when the center of gravity of astronomy and physics shifted from Europe to America, that the work of prestigious American observatories legitimized Einstein's work. As Crelinsten so expertly shows, the glow that now surrounds the famous scientist had its beginnings in these early debates among professional scientists working in the glare of the public spotlight.

Jeffrey Crelinsten is an award-winning science writer and historian and president of The Impact Group, a private communications and research firm specializing in science and technology policy, communications, and education. He has written radio and film documentaries on Einstein and his theory of relativity for the Canadian Broadcasting Corporation (CBC), National Public Radio, and the National Film Board of Canada. His two-hour radio biography of Einstein, prepared for Einstein's 1979 centenary, was re-broadcast by the CBC in June, 2005. He lives in Toronto, Canada.
Loading...
or
Not Currently Available for Direct Purchase