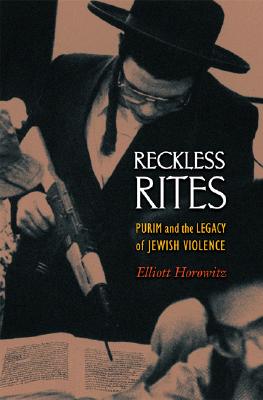 Purim & the Legacy of Jewish Violence

Historical accounts of Jewish violence--particularly against Christians--have long been explosive material. Some historians have distorted these records for anti-Semitic purposes. Others have discounted, dismissed, or simply ignored the evidence, often for apologetic purposes.

In Reckless Rites, Elliott Horowitz takes a new and forthright look at both the history of Jewish violence since late antiquity and the ways in which generations of historians have grappled with that history. In the process, he has written the most wide-ranging book on Jewish violence in any language, and the first to fully acknowledge and address the actual anti-Christian practices that became part of the playful, theatrical violence of the Jewish festival of Purim. He has also examined the different ways in which the book of Esther, upon which the festival is based, was used by Jews and Christians over the centuries--whether as an ancient mirror of modern tribulations or as the scriptural basis for anti-Semitic claims regarding the bloodthirstiness of the Jews.
Reckless Rites reassesses the historical interpretation of Jewish violence--from the alleged massacre of thousands of Christians in seventh-century Jerusalem to later medieval attacks on Christian symbols such as the crucifix, transgressions that were often committed in full knowledge that their likely consequence would be death. A book that calls for major changes in the way that Jewish history is written and conceptualized, Reckless Rites will be essential reading for scholars and students of history, religion, and Jewish-Christian relations.

Elliott Horowitz, a native of New York City, is Associate Professor of Jewish History at Bar-Ilan University, Israel. He is coeditor of the Jewish Quarterly Review.
Loading...
or
Not Currently Available for Direct Purchase