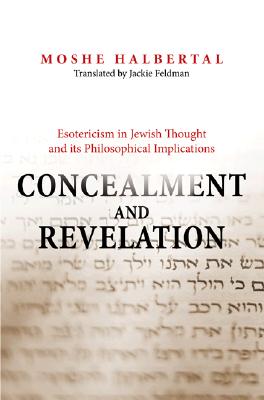 Esotericism in Jewish Thought and Its Philosophical Implications

During the twelfth and thirteenth centuries, great new trends of Jewish thought emerged whose widely varied representatives--Kabbalists, philosophers, and astrologers--each claimed that their particular understanding revealed the actual secret of the Torah. They presented their own readings in a coded fashion that has come to be regarded by many as the very essence of esotericism. Concealment and Revelation takes us on a fascinating journey to the depths of the esoteric imagination. Carefully tracing the rise of esotericism and its function in medieval Jewish thought, Moshe Halbertal's richly detailed historical and cultural analysis gradually builds conceptual-philosophical force to culminate in a masterful phenomenological taxonomy of esotericism and its paradoxes.

Among the questions addressed: What are the internal justifications that esoteric traditions provide for their own existence, especially in the Jewish world, in which the spread of knowledge was of great importance? How do esoteric teachings coexist with the revealed tradition, and what is the relationship between the various esoteric teachings that compete with that revealed tradition? Halbertal concludes that, through the medium of the concealed, Jewish thinkers integrated into the heart of the Jewish tradition diverse cultural influences such as Aristotelianism, Neoplatonism, and Hermeticisims. And the creation of an added concealed layer, unregulated and open-ended, became the source of the most daring and radical interpretations of the tradition.

Moshe Halbertal is professor of philosophy at the Hebrew University of Jerusalem, a fellow at the Shalom Hartman Institute, and the Gruss Professor at New York University Law School. He is the author of People of the Book and the coauthor (with Avishai Margalit) of Idolatry.
Loading...
or support indie stores by buying on