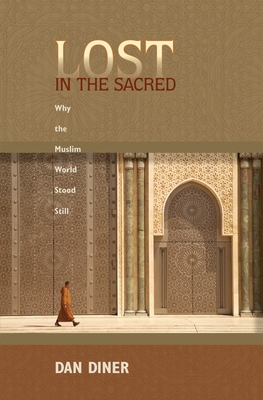 Lost in the Sacred (Hardcover)

Why the Muslim World Stood Still

Lost in the Sacred poses questions about the Muslim world that no other book by a Western writer has dared to ask. Focusing on the Arab Middle East, Dan Diner asks what caused the Muslim world to lag behind so dramatically. Is Western dominance to blame? Or is the problem even with Islam itself? These questions, however unsettling, need to be asked--and they are being posed all across the Muslim world today. This book provides cautious answers that are no less disturbing than the questions.

Diner argues that Islam's cultural stasis is not due to the Muslim faith itself, but to the nature of the sacred it is infused with and that penetrates every aspect of life--spiritual and material. He reveals how the sacred in Islam suspends the acceleration of social time, hinders change, and circumvents secularization and modernity. Diner takes readers on an unforgettable intellectual journey, from today's global conflicts back into the distant past. He describes the Muslim encounter with the emerging West in early modernity, the challenges Western imperial expansion posed in the nineteenth and twentieth centuries, the time-suspending impact of Arabic as a sacred language, the prevention of print, the classical age of Islam with its dazzling heights of learning and culture--and much more. Diner traces an entangled perspective, combining the spiritual with the social, and the cultural with the political. Throughout, he draws our attention to the urgent need for secularization and modernization in Islam.

The Muslim world is in crisis. Lost in the Sacred explains why.

Dan Diner is professor of modern history at the Hebrew University of Jerusalem and director of the Simon Dubnow Institute for Jewish History and Culture at the University of Leipzig. His books include Beyond the Conceivable: Studies on Germany, Nazism, and the Holocaust and Cataclysms: A History of the Twentieth Century from Europe's Edge.
or
Not Currently Available for Direct Purchase
Copyright © 2020 American Booksellers Association