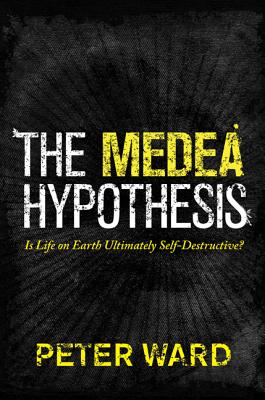 Is Life on Earth Ultimately Self-Destructive?

In The Medea Hypothesis, renowned paleontologist Peter Ward proposes a revolutionary and provocative vision of life's relationship with the Earth's biosphere--one that has frightening implications for our future, yet also offers hope. Using the latest discoveries from the geological record, he argues that life might be its own worst enemy. This stands in stark contrast to James Lovelock's Gaia hypothesis--the idea that life sustains habitable conditions on Earth. In answer to Gaia, which draws on the idea of the good mother who nurtures life, Ward invokes Medea, the mythical mother who killed her own children. Could life by its very nature threaten its own existence?

According to the Medea hypothesis, it does. Ward demonstrates that all but one of the mass extinctions that have struck Earth were caused by life itself. He looks at our planet's history in a new way, revealing an Earth that is witnessing an alarming decline of diversity and biomass--a decline brought on by life's own biocidal tendencies. And the Medea hypothesis applies not just to our planet--its dire prognosis extends to all potential life in the universe. Yet life on Earth doesn't have to be lethal. Ward shows why, but warns that our time is running out. Breathtaking in scope, The Medea Hypothesis is certain to arouse fierce debate and radically transform our worldview. It serves as an urgent challenge to all of us to think in new ways if we hope to save ourselves from ourselves.

Peter Ward's many books include the highly acclaimed Rare Earth: Why Complex Life Is Uncommon in the Universe and Under a Green Sky (Collins). He is professor of biology and Earth and space sciences at the University of Washington, and an astrobiologist with NASA.
Loading...
or
Not Currently Available for Direct Purchase