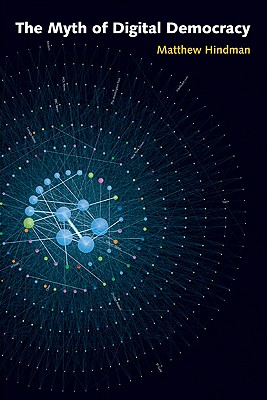 The Myth of Digital Democracy

Is the Internet democratizing American politics? Do political Web sites and blogs mobilize inactive citizens and make the public sphere more inclusive? The Myth of Digital Democracy reveals that, contrary to popular belief, the Internet has done little to broaden political discourse but in fact empowers a small set of elites--some new, but most familiar.

Matthew Hindman argues that, though hundreds of thousands of Americans blog about politics, blogs receive only a miniscule portion of Web traffic, and most blog readership goes to a handful of mainstream, highly educated professionals. He shows how, despite the wealth of independent Web sites, online news audiences are concentrated on the top twenty outlets, and online organizing and fund-raising are dominated by a few powerful interest groups. Hindman tracks nearly three million Web pages, analyzing how their links are structured, how citizens search for political content, and how leading search engines like Google and Yahoo funnel traffic to popular outlets. He finds that while the Internet has increased some forms of political participation and transformed the way interest groups and candidates organize, mobilize, and raise funds, elites still strongly shape how political material on the Web is presented and accessed.
The Myth of Digital Democracy. debunks popular notions about political discourse in the digital age, revealing how the Internet has neither diminished the audience share of corporate media nor given greater voice to ordinary citizens.

Matthew Hindman is assistant professor of political science at Arizona State University.
Loading...
or
Not Currently Available for Direct Purchase