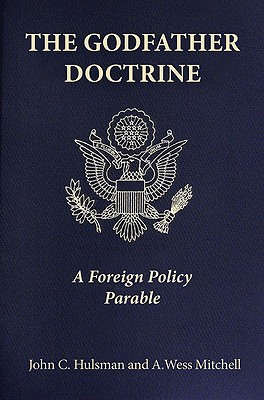 The Godfather Doctrine draws clear and essential lessons from perhaps the greatest Hollywood movie ever made to illustrate America's changing geopolitical place in the world and how our country can best meet the momentous strategic challenges it faces.

In the movie The Godfather, Don Corleone, head of New York's most powerful organized-crime family, is shockingly gunned down in broad daylight, leaving his sons Sonny and Michael, along with his adopted son, consigliere Tom Hagen, to chart a new course for the family. In The Godfather Doctrine, John Hulsman and Wess Mitchell show how the aging and wounded don is emblematic of cold-war American power on the decline in a new world where our enemies play by unfamiliar rules, and how the don's heirs uncannily exemplify the three leading schools of American foreign policy today. Tom, the left-of-center liberal institutionalist, thinks the old rules still apply and that negotiation is the answer. Sonny is the Bush-era neocon who shoots first and asks questions later, proving an easy target for his enemies. Only Michael, the realist, has a sure feel for the changing scene, recognizing the need for flexible combinations of soft and hard power to keep the family strong and maintain its influence and security in a dangerous and rapidly changing world.

Based on Hulsman and Mitchell's groundbreaking and widely debated article, "Pax Corleone," The Godfather Doctrine explains for everyone why Francis Ford Coppola's epic story about a Mafia dynasty holds key insights for ensuring America's survival in the twenty-first century.

John C. Hulsman is the Alfred von Oppenheim Scholar in Residence at the German Council on Foreign Relations in Berlin. He is the coauthor, with Anatol Lieven, of Ethical Realism. A. Wess Mitchell is cofounder and director of research at the Center for European Policy Analysis (CEPA) in Washington, D.C.
or
Not Currently Available for Direct Purchase
Copyright © 2020 American Booksellers Association