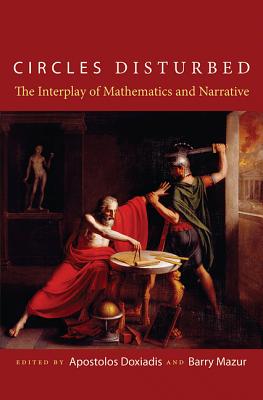 The Interplay of Mathematics and Narrative

Why narrative is essential to mathematics

Circles Disturbed brings together important thinkers in mathematics, history, and philosophy to explore the relationship between mathematics and narrative. The book's title recalls the last words of the great Greek mathematician Archimedes before he was slain by a Roman soldier--Don't disturb my circles--words that seem to refer to two radically different concerns: that of the practical person living in the concrete world of reality, and that of the theoretician lost in a world of abstraction. Stories and theorems are, in a sense, the natural languages of these two worlds--stories representing the way we act and interact, and theorems giving us pure thought, distilled from the hustle and bustle of reality. Yet, though the voices of stories and theorems seem totally different, they share profound connections and similarities. A book unlike any other, Circles Disturbed delves into topics such as the way in which historical and biographical narratives shape our understanding of mathematics and mathematicians, the development of myths of origins in mathematics, the structure and importance of mathematical dreams, the role of storytelling in the formation of mathematical intuitions, the ways mathematics helps us organize the way we think about narrative structure, and much more. In addition to the editors, the contributors are Amir Alexander, David Corfield, Peter Galison, Timothy Gowers, Michael Harris, David Herman, Federica La Nave, G.E.R. Lloyd, Uri Margolin, Colin McLarty, Jan Christoph Meister, Arkady Plotnitsky, and Bernard Teissier.

Apostolos Doxiadis is a writer whose books include Uncle Petros and Goldbach's Conjecture and Logicomix.Barry Mazur is the Gerhard Gade University Professor in the Department of Mathematics at Harvard University. His books include Imagining Numbers and Arithmetic Moduli of Elliptic Curves (Princeton).
Loading...
or support indie stores by buying on