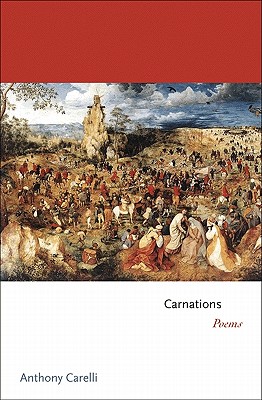 In Anthony Carelli's remarkable debut, Carnations, the poems attempt to reanimate dead metaphors as blossoms: wild and lovely but also fleeting, mortal, and averse to the touch. Here, the poems are carnations, not only flowers, but also body-making words. Nodding to influences as varied as George Herbert, Francis Ponge, Fernando Pessoa, and D. H. Lawrence, Carelli asserts that the poet's materials--words, objects, phenomena--are sacred, wilting in the moment, yet perennially renewed. Often taking titles from a biblical vocabulary, Carnations reminds us that unremarkable places and events--a game of Frisbee in a winter park, workers stacking panes in a glass factory, or the daily opening of a caf --can, in a blink, be new. A short walk home is briefly transformed into a cathedral, and the work-worn body becomes a dancer, a prophet, a muse.
______

From Carnations:
THE PROPHETS

A river. And if not the river nearby, then a dream
of a river. Nothing happens that doesn't happen
along a river, however humble the water may be.

Take Rowan Creek, the trickle struggling to lug
its mirroring across Poynette, wherein, suspended,
so gentle and shallow, I learned to walk, bobbing

at my father's knees. Later, whenever we tried
to meander on our inner tubes, we'd get lodged
on the bottom. Seth, remember, no matter how we'd

kick and shove off, we'd just get lodged again?
At most an afternoon would carry us a hundred feet
toward the willows. We'd piss ourselves on purpose

just to feel the spirits of our warmth haloing out.
And once, two bald men on the footbridge, bowing
in the sky, stared down at us without a word.

Anthony Carelli was raised in Poynette, Wisconsin, and studied at the University of Wisconsin-Madison before completing an MFA in poetry at New York University. His poems have appeared in various magazines, including the New Yorker. He lives in Brooklyn, New York. This is his first book.
or support indie stores by buying on