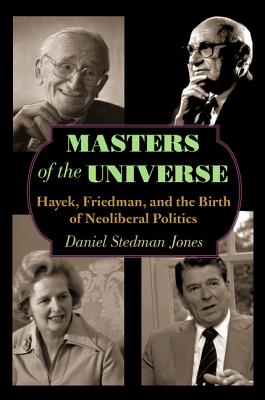 Masters of the Universe

Hayek, Friedman, and the Birth of Neoliberal Politics

How did American and British policymakers become so enamored with free markets, deregulation, and limited government? This book--the first comprehensive transatlantic history of the rise of neoliberal politics--presents a surprising answer. Based on archival research and interviews with leading participants in the movement, Masters of the Universe traces the ascendancy of neoliberalism from the academy of interwar Europe to supremacy under Reagan and Thatcher and in the decades since. Daniel Stedman Jones argues that there was nothing inevitable about the victory of free-market politics. Far from being the story of the simple triumph of right-wing ideas, the neoliberal breakthrough was contingent on the economic crises of the 1970s and the acceptance of the need for new policies by the political left. Masters of the Universe describes neoliberalism's road to power, beginning in interwar Europe but shifting its center of gravity after 1945 to the United States, especially to Chicago and Virginia, where it acquired a simple clarity that was developed into an uncompromising political message. Neoliberalism was communicated through a transatlantic network of think tanks, businessmen, politicians, and journalists that was held together by Friedrich Hayek and Milton Friedman. After the collapse of Bretton Woods in 1971, and the stagflation that followed, their ideas finally began to take hold as Keynesianism appeared to self-destruct. Later, after the elections of Reagan and Thatcher, a guileless faith in free markets came to dominate politics. Fascinating, important, and timely, this is a book for anyone who wants to understand the history behind the Anglo-American love affair with the free market, as well as the origins of the current economic crisis.

Daniel Stedman Jones is a barrister in London. He was educated at the University of Oxford and at the University of Pennsylvania, where he earned a PhD in history. He has worked as a policy adviser for the New Opportunities Fund and as a researcher for Demos.
Loading...
or support indie stores by buying on