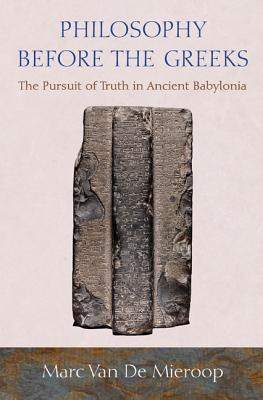 Philosophy Before the Greeks (Hardcover)

The Pursuit of Truth in Ancient Babylonia

In the first century BC, the Greek historian Diodorus of Sicily praised the Babylonians for their devotion to philosophy. Showing the justice of Diodorus's comment, this is the first book to argue that there were Babylonian philosophers and that they studied knowledge systematically using a coherent system of logic rooted in the practices of cuneiform script. Van De Mieroop uncovers Babylonian approaches to knowledge in three areas: the study of language, which in its analysis of the written word formed the basis of all logic; the art of divination, which interpreted communications between gods and humans; and the rules of law, which confirmed that royal justice was founded on truth.

The result is an innovative intellectual history of the ancient Near Eastern world during the many centuries in which Babylonian philosophers inspired scholars throughout the region--until the first millennium BC, when the breakdown of this cosmopolitan system enabled others, including the Greeks, to develop alternative methods of philosophical reasoning.

Marc Van De Mieroop is professor of history at Columbia University. His books include The Ancient Mesopotamian City, King Hammurabi of Babylon, A History of the Ancient Near East, The Eastern Mediterranean in the Age of Ramesses II, and A History of Ancient Egypt.
or
Not Currently Available for Direct Purchase
Copyright © 2020 American Booksellers Association