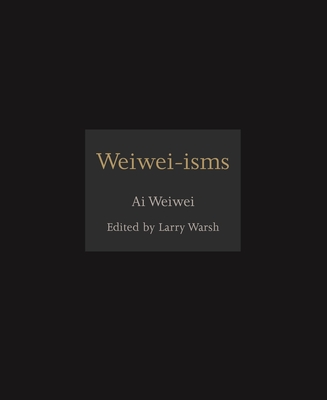 This collection of quotes demonstrates the elegant simplicity of Ai Weiwei's thoughts on key aspects of his art, politics, and life. A master at communicating powerful ideas in astonishingly few words, Ai Weiwei is known for his innovative use of social media to disseminate his views. The short quotations presented here have been carefully selected from articles, tweets, and interviews given by this acclaimed Chinese artist and activist. The book is organized into six categories: freedom of expression; art and activism; government, power, and moral choices; the digital world; history, the historical moment, and the future; and personal reflections. Together, these quotes span some of the most revealing moments of Ai Weiwei's eventful career--from his risky investigation into student deaths in the 2008 Sichuan earthquake to his arbitrary arrest in 2011--providing a window into the mind of one of the world's most electrifying and courageous contemporary artists. Select Quotes from the Book: On Freedom of Expression

On Art and Activism

On the Digital World

On History, the Historical Moment, and the Future

Ai Weiwei is one of China's most influential and inspiring figures. Artist, architect, curator, and activist, he has been an outspoken critic of the Chinese government's stance on human rights and democracy. His work has been exhibited at the Venice Biennale, the Guangzhou Triennial, Tate Modern, the Smithsonian, and other venues throughout the world. Larry Warsh has been active in the art world for more than thirty years. He has collaborated with Ai Weiwei on several projects, including the public art installation Circle of Animals / Zodiac Heads (2010). Warsh is a former member of the Contemporary Arts Council of the Asia Society and the Contemporary Arts Committee of the China Institute. He has also served on the boards of the Museum of Contemporary Art, China; the Alliance for the Arts; and the Getty Museum Photographs Council. He is currently on the board of Muse Film and Television and is a member of the Basquiat Authentication Committee.
Loading...
or support indie stores by buying on