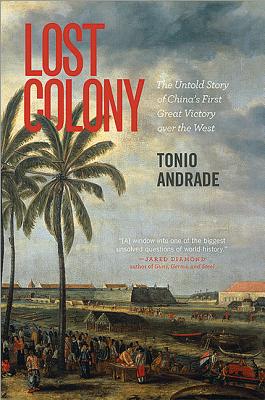 The Untold Story of China's First Great Victory Over the West

During the seventeenth century, Holland created the world's most dynamic colonial empire, outcompeting the British and capturing Spanish and Portuguese colonies. Yet, in the Sino-Dutch War--Europe's first war with China--the Dutch met their match in a colorful Chinese warlord named Koxinga. Part samurai, part pirate, he led his generals to victory over the Dutch and captured one of their largest and richest colonies--Taiwan. How did he do it? Examining the strengths and weaknesses of European and Chinese military techniques during the period, Lost Colony provides a balanced new perspective on long-held assumptions about Western power, Chinese might, and the nature of war.

It has traditionally been asserted that Europeans of the era possessed more advanced science, technology, and political structures than their Eastern counterparts, but historians have recently contested this view, arguing that many parts of Asia developed on pace with Europe until 1800. While Lost Colony shows that the Dutch did indeed possess a technological edge thanks to the Renaissance fort and the broadside sailing ship, that edge was neutralized by the formidable Chinese military leadership. Thanks to a rich heritage of ancient war wisdom, Koxinga and his generals outfoxed the Dutch at every turn.

Exploring a period when the military balance between Europe and China was closer than at any other point in modern history, Lost Colony reassesses an important chapter in world history and offers valuable and surprising lessons for contemporary times.

Tonio Andrade is professor of history at Emory University. He is the author of How Taiwan Became Chinese: Dutch, Spanish, and Han Colonization in the Seventeenth Century.
or
Buy Here
Copyright © 2020 American Booksellers Association