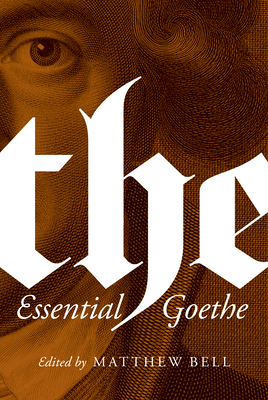 The Essential Goethe is the most comprehensive and representative one-volume collection of Goethe's writings ever published in English. It provides English-language readers easier access than ever before to the widest range of work by one of the greatest writers in world history. Goethe's work as playwright, poet, novelist, and autobiographer is fully represented. In addition to the works for which he is most famous, including Faust Part I and the lyric poems, the volume features important literary works that are rarely published in English--including the dramas Egmont, Iphigenia in Tauris, and Torquato Tasso and the bildungsroman Wilhelm Meister's Apprenticeship, a foundational work in the history of the novel. The volume also offers a selection of Goethe's essays on the arts, philosophy, and science, which give access to the thought of a polymath unrivalled in the modern world. Primarily drawn from Princeton's authoritative twelve-volume Goethe edition, the translations are highly readable and reliable modern versions by scholars of Goethe. The volume also features an extensive introduction to Goethe's life and works by volume editor Matthew Bell.

Johann Wolfgang von Goethe (1749-1832) was one of the greatest writers of the German Romantic period. Matthew Bell is professor of German and comparative literature at King's College London. His books include Goethe's Naturalistic Anthropology and Melancholia: The Western Malady.
or support indie stores by buying on
Copyright © 2020 American Booksellers Association