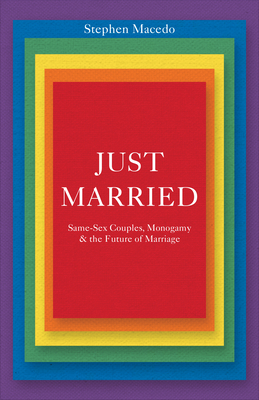 Same-Sex Couples, Monogamy, and the Future of Marriage

The case for marriage equality and monogamy in a democratic society

The institution of marriage stands at a critical juncture. As gay marriage equality gains acceptance in law and public opinion, questions abound regarding marriage's future. Will same-sex marriage lead to more radical marriage reform? Should it? Antonin Scalia and many others on the right warn of a slippery slope from same-sex marriage toward polygamy, adult incest, and the dissolution of marriage as we know it. Equally, many academics, activists, and intellectuals on the left contend that there is no place for monogamous marriage as a special status defined by law. Just Married demonstrates that both sides are wrong: the same principles of democratic justice that demand marriage equality for same-sex couples also lend support to monogamous marriage.

Stephen Macedo displays the groundlessness of arguments against same-sex marriage and defends marriage as a public institution against those who would eliminate its special status or supplant it with private arrangements. Arguing that monogamy reflects and cultivates our most basic democratic values, Macedo opposes the legal recognition of polygamy, but agrees with progressives that public policies should do more to support nontraditional caring and caregiving relationships. Throughout, Macedo explores the meaning of contemporary marriage and the reasons for its fragility and its enduring significance. His defense of reformed marriage against slippery slope alarmists on the right, and radical critics of marriage on the left, vindicates the justice and common sense of the emerging consensus.

Casting new light on today's debates over the future of marriage, Just Married lays the groundwork for a stronger institution.

Stephen Macedo is the Laurance S. Rockefeller Professor of Politics and the former director of the University Center for Human Values at Princeton University. His many books include "Liberal Virtues" and "Diversity and Distrust." He is a member of the American Academy of Arts and Sciences.
or
Buy Here
Copyright © 2020 American Booksellers Association